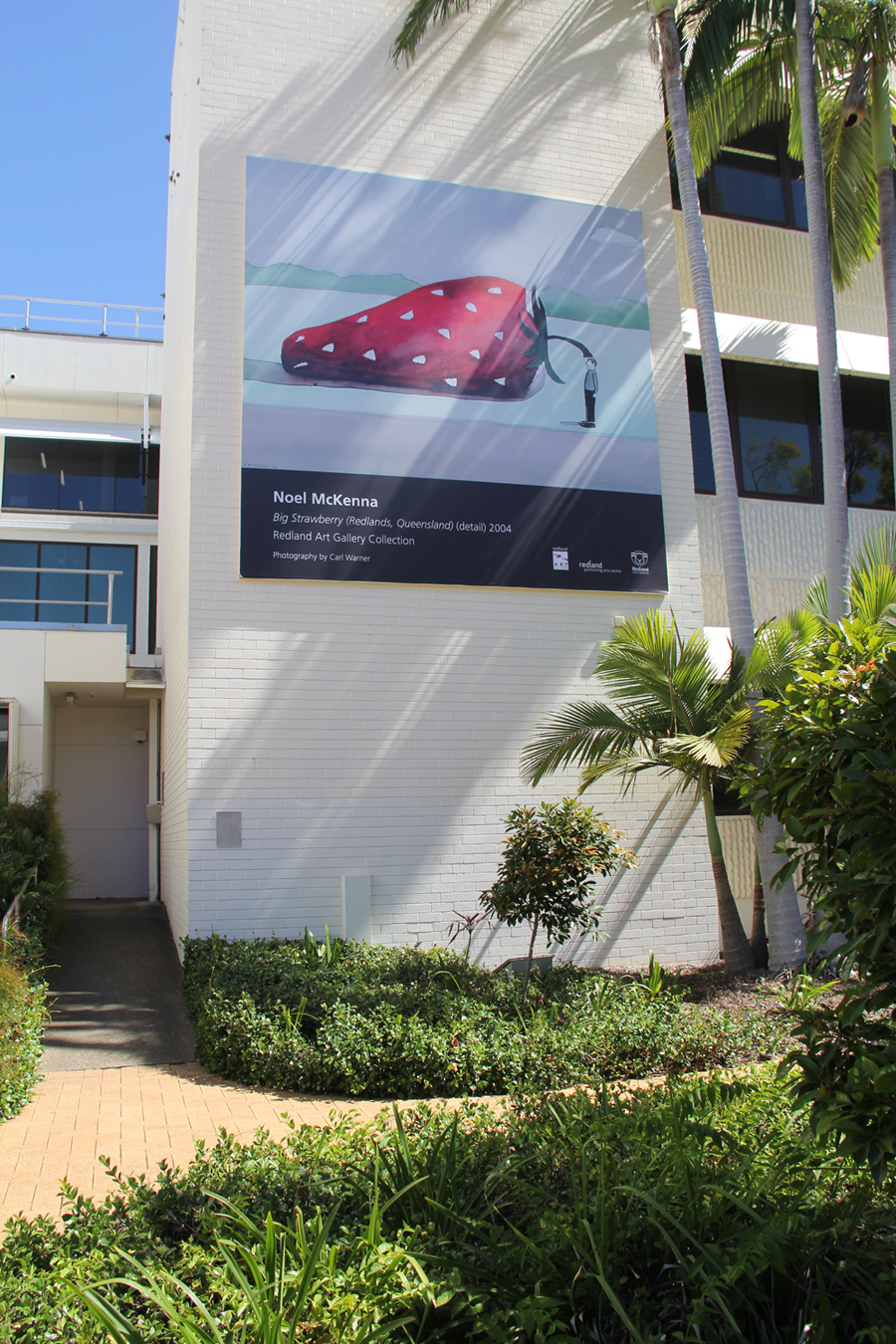 The banner outside RAG, Cleveland features artist Noel McKenna’s Big Strawberry (Redlands Queensland) watercolour painting. The work is from a series of paintings portraying the oversized tourist attractions that are dotted along our highways.

McKenna works in a variety of mediums, including ceramics, metal sculpture, enamel and watercolour. Through these various methods of art making, McKenna instils a humble and engaging quality to familiar imagery. A feature of McKenna’s method is to create thematically linked groups of work. In his watercolour Big Strawberry (Redlands, Queensland) painted in 2004, the work communicates the humour of these strange sculptures as well as the isolation of these rural landmarks.

McKenna was born in Brisbane in 1956 and is now based in Sydney. After studying architecture at the University of Queensland in 1974 and 1975, the artist continued his education at the Brisbane College of Art, attending the College between 1976 and 1978. In 1981 he studied at the Alexander Mackie College, Sydney. A regular finalist in the Wynne and Sulman Prizes at the Art Gallery of New South Wales, McKenna won the Sulman in 1994. 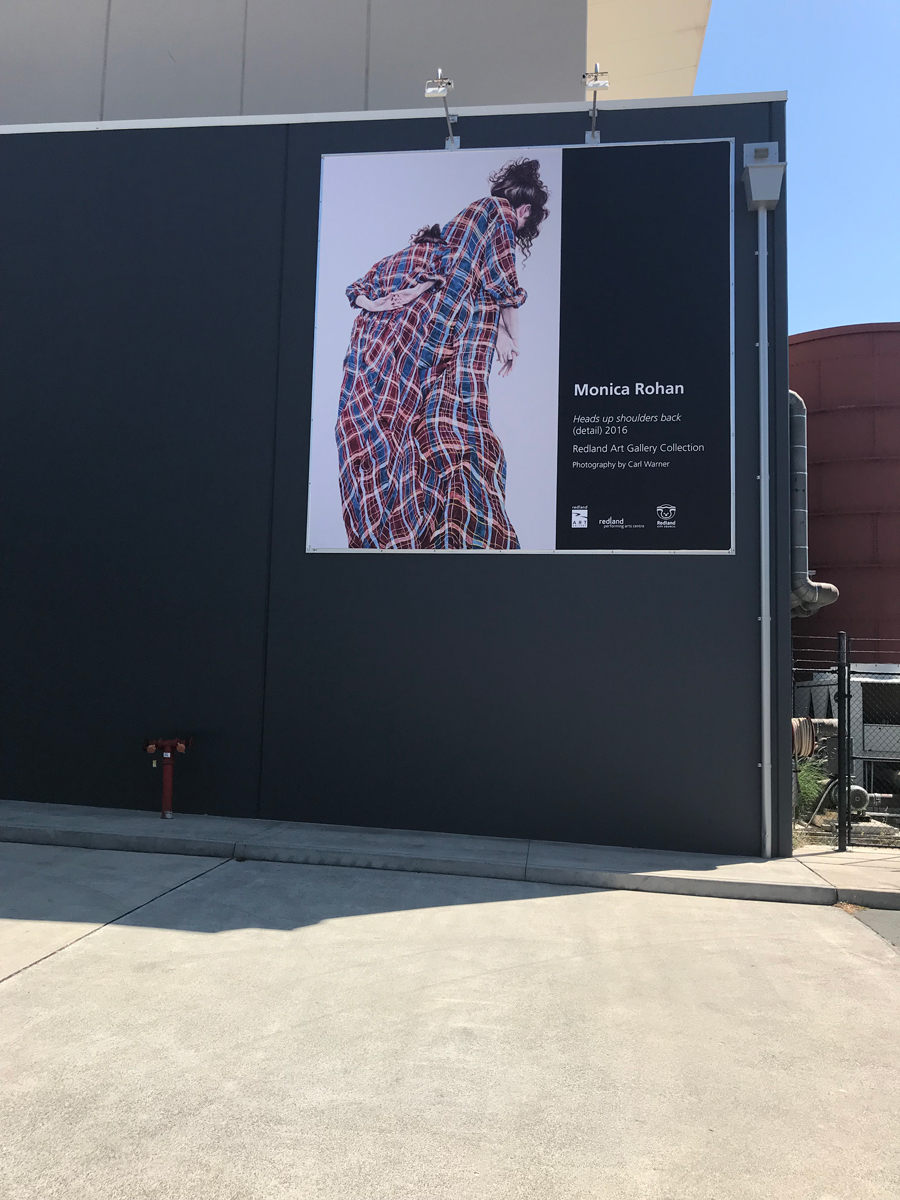 Monica Rohan’s Head up shoulders back is featured on the banner outside Redland Performing Arts Centre, Cleveland. The work was runner up in the 2016 Redland Art Awards.

Rohan’s characteristic compositions couple vibrant and detailed patterns with gentle figurative poses. Her compositions, influenced by the artist Amy Cutler and Édouard Vuillard’s Interior, Mother and Sister of the Artist (1893), explore the potential of pattern. Drawing on patterns from everyday environments such as nature or fabric in her paintings, Rohan cites her childhood spent drawing and also exploring the hills surrounding her family’s farm in Queensland as an influence to her practice.

Rohan is interested in biography and narrative, and through portraiture expresses common experiences of frailty and limitation. Blending realism and abstraction, Head up shoulders back, plays on the demand often directed to introverts to be confident and supress self-consciousness. The two figures defy the demand and are slumped with their hands clasped, revealing their apprehension. Contrasted with their exaggerated size and drama of the repetitive pattern of their dress, Rohan captures the tension between the desire to withdraw and the inevitability of being seen. 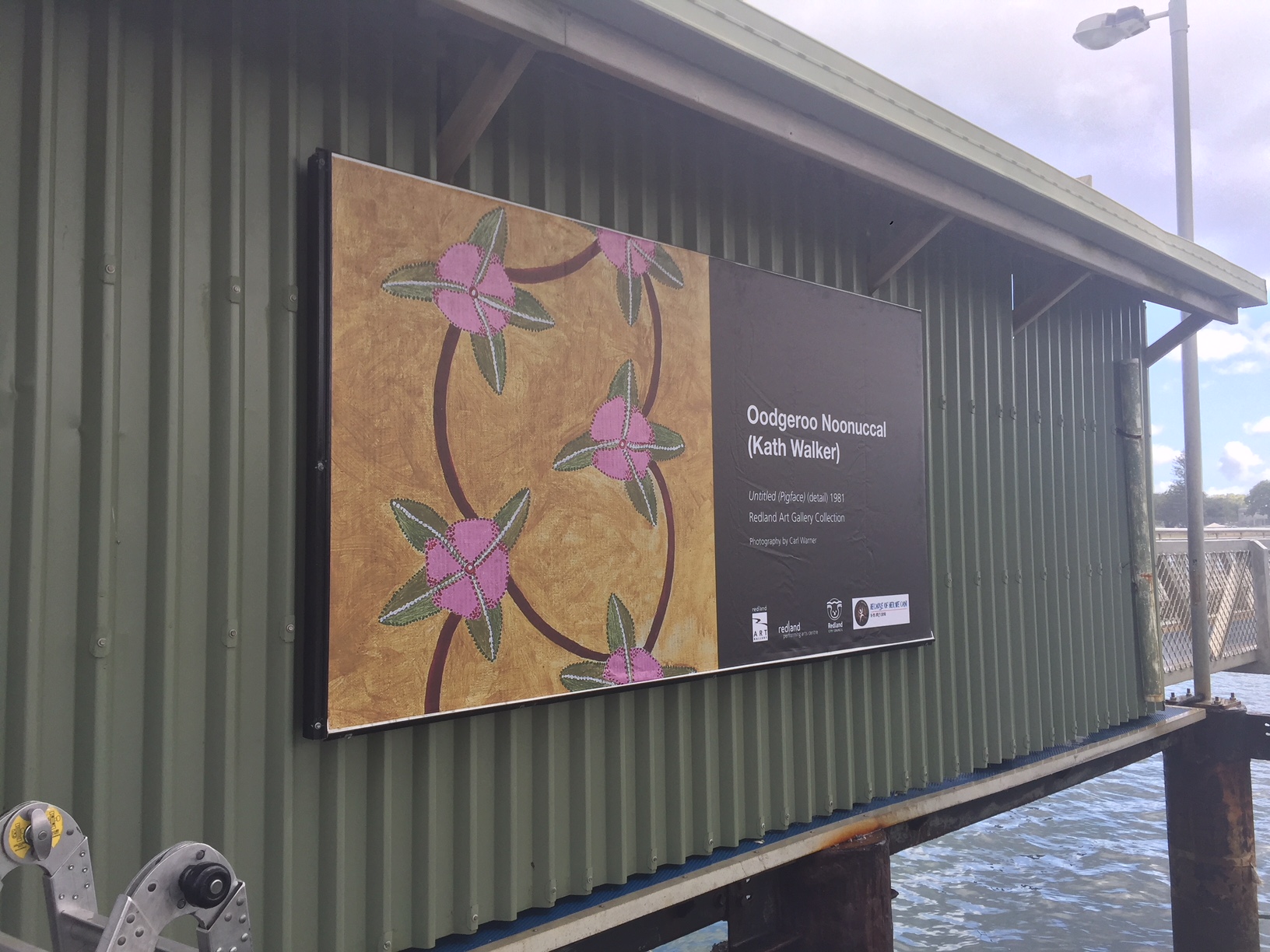 Oodgeroo Noonuccal was born Kathleen Jean Mary Ruska, on Minjerribah (North Stradbroke Island) in 1920; Oodgeroo Noonuccal (Oodgeroo means ‘Paperbark’ tree of the tribe Nunuccal). She was a poet, political activist, artist and educator. She was also a campaigner for Aboriginal rights. Oodgeroo was best known for her poetry, and was the first Aboriginal Australian to publish a book of verse.

Through the 1960s she began to emerge as a prominent figure, both as a political activist and as a writer. She was Queensland state secretary of the Federal Council for the Advancement of Aboriginal and Torres Strait Islanders (FCAATSI), and was involved in a number of other political organisations. She was a key figure in the campaign for the reform of the Australian constitution to allow Aboriginal people full citizenship, lobbying Prime Minister Robert Menzies in 1965, and his successor Harold Holt in 1966.

In considering Oodgeroo’s areas of involvement in the arts, there is an obvious emphasis on her poetry and writing for which she received national and international recognition. But she also loved to draw and paint; and become active as an artist during her retirement on North Stradbroke Island in the late 1970s. Oodgeroo Noonuccal (under the name Kathleen Walker) was appointed a Member of the Order of the British Empire (Civil) for services to the community.