The changing display of temporary banner art at both Cleveland, adjacent to the Redland Art Gallery, and at the Harold Walker Jetty, Dunwich, North Stradbroke Island, is an example of temporary public artwork; part of an initiative of the Creative Arts Redlands’ Public Art Program. 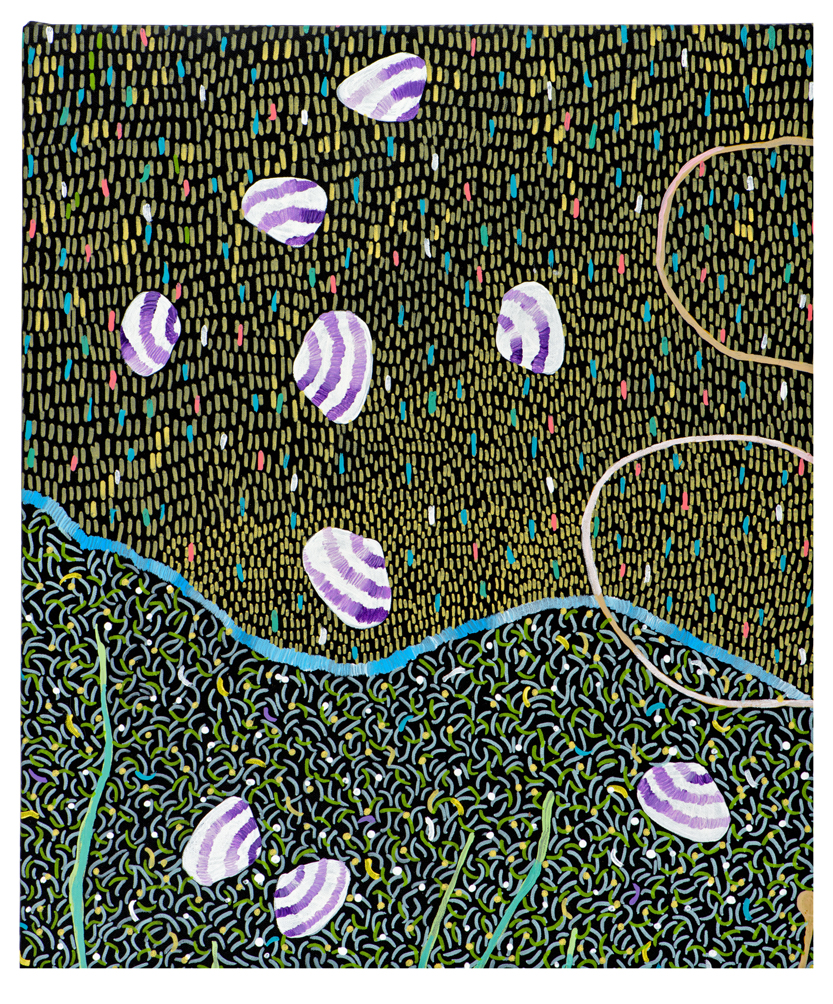 The banner is one part of the 2017 Quandamooka Festival Temporary Public Art project, an initiative of the Quandamooka Yoolooburrabee Aboriginal Corporation (QYAC) partnered by Creative Arts Redlands, Redland City Council to celebrate the culture, country and the people of the Quandamooka.

This public art project by acclaimed Quandamooka artist Elisa Jane Carmichael highlights and preserves the strong connections between country and generations past, present and future. A detail of Carmichael’s artwork, For the women in my life, past, present, future, painted in 2017, has been digitally reproduced as two duplicate prints and installed at two sites at Cleveland and North Stradbroke Island.

To complement these two banners, a third prominent site has been introduced at the Redland Performing Arts Centre at the entry of Cleveland CBD. This banner features Carmichael’s photographic dual portrait Carrying Home 2017, that explores who she is today and her place as an Aboriginal woman: a saltwater woman living on desert country.

Elisa Jane Carmichael is Ngugi woman from the Quandamooka Country of Moreton Bay, Queensland. In 2017, Carmichael has been completing an Artist in Residence titled Connecting Waves in Alice Springs, supported by Indigenous creative agency Gilimbaa. Much of her vibrant work is derived from her passion to nurture and preserve her connection to the sand and sea. Carmichael has previously been commissioned by Redland City Council to produce the Wellington Point Village Green mural We are here in 2016 and her artwork is held in the Redland Art Gallery Collection.

For the women in my life, past, present, future (detail) and Carrying Home banners will be displayed from July to December 2017. They are part of a changing display of temporary banner art in the Cleveland CBD and at the Harold Walker Jetty, Dunwich, North Stradbroke Island.